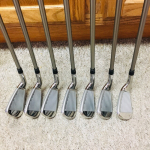 By Brian
Walla Walla
Cobra Irons
August 14, 2019
Read other reviews of clubs bought through Rock Bottom Golf wasn't sure if they were just made up. When I received my Cobra Irons they were in better condition than I expected. So thank you.
By Jayme
Savannah
Great Deal!!!!!
August 8, 2019
Fantastic deal. Im super happy
ProsGreat set of clubs
By Eric
Chicago, IL
They goooooo
July 30, 2019
These clubs fly as advertised! I'm still getting my alignment dialed in, but love the contact feel and distance from these. Definitely would recommend for handicaps of 15 and below, as they may not give quite the forgiveness a higher handicap player is looking for.
ProsDistance Feel Sound
ConsAlignment can be tricky
By Noah
NC
Love to play with these clubs
July 22, 2019
This is my second set ( keep em at a vacation home). They are forgiving and hit well from almost any lie.
ProsEasy to hit. set up well
Consnone
By Frank
Lincoln, Nebraska
Great clubs and accurately described by RBG
July 17, 2019
I love the clubs except for one issue, simple to fix. They are as described in excellent condition. They were not standard length. Clubs were either cut down or originally ordered 1/2 inch short. So I am adding extensions to get them to match my swing.
ProsClubs are in exceptional condition and are what I wanted.
ConsRBG likely had no way to know this, but clubs were all 1/2 inch shorter than standard. I am having toi add extensions to get them to match my swing.
By Ernie
Florida
Great Club
July 3, 2019
This club was in excellent condition and the price was even better. I always get my golf equipment from RBG they provide top shelf customer service!
By Larry
Lakewood, Washington
Great irons and a great deal
May 6, 2019
I have played Exotics for some time, but wanted to go back to steel shafts. I read the reviews on the Exotics E8 irons and decided to give them a try. Best decision I've made on clubs and the deal from Rockbottom was great.
By Sebastian
OH
Club was like new!
May 4, 2019
Club was listed as "very good," but came in what I would consider "excellent" condition!
By Ryan Z.
VA
Normal wedge
February 27, 2019
Typical wedge use it In the house to chip rubber balls. Nice feel soft great look to it glossy.
By Greg
Toms River, New Jersey
Good club
December 27, 2018
Seemed in better condition than listed, grip could be replaced but that’s easy.
By Geoff
Singapore
Great value.
December 12, 2018
Description was accurate, the condition was really "like new". Great value.
ConsNo headcover.
By Ken
Columbia MO
Better than expected for a used club
April 16, 2018
I have purchased several used golf clubs over the years and this club was better than advertised by the company. The service was great and I would recommend Rock Bottom to everyone. I am very happy with my new club.
By Jynx
Mt Juliet
Better than expected
April 14, 2018
M2 driver described as like new and that's exactly what I received I was expecting to have to return but the club was as advertised. Thank You Rock Bottom Golf
ProsCondition and added yardage.
ConsZERO
By Lee
Honolulu
2016 M2 9.5 Driver
April 7, 2018
Club came in great condition, like New was just as described. Long and forgiving driver.
ProsLong Forgiving
By Carl
St. Louis, MO
Slightly Disapointed
April 5, 2018
I purchased this club with the 'like new' description which is described as "virtually no traces of wear, may have been hit one or more times in controlled conditions. May show signs of very minor "shop wear" ". Upon inspection of the club it did have minor scratches on the bottom of the club where it was hit a few times and some marks on the face, but I also discovered a noticeable chip on the head of the club where it must have been dropped. The chip was down to the bare metal of the club and was a few mm wide. I decided to keep the club since I got it at a decent price and the rest of the club was in good condition. I was disappointed, however, in the flaw that I must now fix to avoid further damage to the paint surface.
ProsAffordable Received correct club with accurate specs Club face, shaft and grip in good condition
Consscratches on bottom of club head Noticeable chip on rim of club head
By Mike L.
Dayton, OH
It really is Like New!
March 24, 2018
Good deal from RBG. I bought in 'like new' condition and everything looks and feels great. No blemishes to speak of on this driver. I play the TM M1 fairway and hybrid and tested the original M1 driver and found the M2 driver in stock X-Stiff Fujikura Pro was much better for me in testing.
ProsLike New condition, great bargain price Original M2 driver hits new numbers for me
By Phillip
Kalispell, Montana
Not a like new head.
March 14, 2018
Good price on a nice product. However the head I received was not in like new condition. The head had more wear then the driver I played all last season. Shaft and grip were in like new condition. (2016 m2 like new)
ProsNice shaft and grip, good price for a nice diver.
ConsHead was good condition not like new.
Page 1 of 1

Check Out Our Hottest Promos